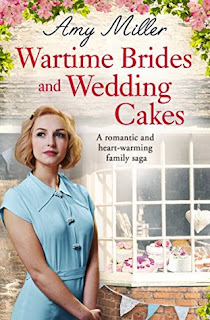 January 1941: As Charlie Barton tiptoes silently out of the house one cold winter morning to go off and fight for his country, his wife Audrey is left to run the family bakery on her own.

Times are tougher than ever, but at the Barton Bakery in Bournemouth, Audrey is determined as always to serve the town with love, loaves and cakes, even as the town is reeling from the struggles of the Blitz.

Audrey’s brother William has returned from battle with serious wounds. His fiancé Elsie is waiting for wedding bells, but William is a changed man, and will her hopes be in vain?

Bakery helper Maggie has her heart set on dashing officer George. But will George still want to marry her when he discovers the truth about her family?

And Lily, Audrey’s stepsister, is struggling to raise her illegitimate baby and facing judgement from many in the town. The man who broke her heart returns with an offer, and Lily faces a hard decision about where her future lies.

When disaster strikes the bakery, Audrey fears that everything she has worked for may be ruined. With her shop threatened and her family in turmoil, can she fight to save everything she holds dear?


Kindle Edition, 230 pages
Published March 7th 2018 by Bookouture
Series: Wartime Bakery #2
Genre: Historical Fiction
Kristine's Thoughts:
** I received an advanced readers copy from Bookouture in exchange for an honest review. Thank you!**
Wartime Brides and Wedding Cakes is the second book in the Wartime Bakery series. I did not read the first book in the series but reviews assured me that it could be read as a stand alone. I have to disagree a little bit with that statement. Although I eventually was able to follow along I spent a significant amount of time trying to figure out who was who and getting quite confused. I feel like I needed to read the first book to familiarise myself with the characters. I constantly felt like I was missing something because the characters were already developed before I was introduced to them.
Once I became familiar with the different characters I did find myself enjoying the story and the struggles that they each were dealing with. I'm a huge fan of historical fiction and WW11 stories to be more specific. Although it was a horrific time and there were many hardships, including for the characters in this book, this book is more on the fluffy side of the WW11 stories that I am use to reading. Not to take away from any of the issues that arose but it wasn't as hardcore for a lack of better words.
In the end it was a quick and easy book to read that I was eventually able to get lost in. I do recommend reading the first book first. I feel that my rating might have been higher if I had done the same.