Review: How Not To Fall by Emily Foster 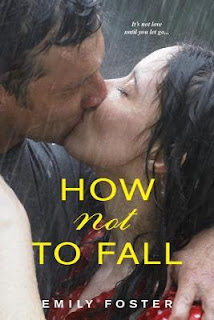 In her witty and breathtakingly sexy novel, Emily Foster introduces a story of lust, friendship, and other unpredictable experiments. . .

Data, research, scientific formulae--Annabelle Coffey is completely at ease with all of them. Men, not so much. But that's all going to change after she asks Dr. Charles Douglas, the postdoctoral fellow in her lab, to have sex with her. Charles is not only beautiful, he is also adorably awkward, British, brilliant, and nice. What are the odds he'd turn her down?

Very high, as it happens. Something to do with that whole student/teacher/ethics thing. But in a few weeks, Annie will graduate. As soon as she does, the unlikely friendship that's developing between them can turn physical--just until Annie leaves for graduate school. Yet nothing could have prepared either Annie or Charles for chemistry like this, or for what happens when a simple exercise in mutual pleasure turns into something as exhilarating and infernally complicated as love.

I received an advanced copy of this book from the publisher via Netgalley in exchange for an honest review.  The expected publication date is June 28th, 2016.

Dude....I wish I could say I loved this story but unfortunately it fell short for me.  More to come on the word dude.

The synopsis of the story sounded solid and it appeared to me a good NA read.  First  warning.  I would not classify this as NA, it definitely falls in the erotica genre so those who are faithful to one genre need to be aware.  For me, I am not opposed to Erotica, however certain conditions must be met for my enjoyment.  There must still be a firm plot outside of the sex scenes to keep me invested. I found that aside from having sex, the only other thing that occurred in the story was rock climbing.  This left me without investment in either character.

When looking at Annabelle, she was a highly intelligent student on her way to med school.
With this comes a certain amount of intellect.  She instead read as a teenager without any social skills.  Here use of the word dude was both annoying an overused.  Dude I want to jump your bones is not sexy!

Then come Charles.  He was supposed to be an awkward yet hot doctor yet put him in the bedroom and he is all in charge and to be honest kind of creepy.  Who gets turned on by having their partner recite data from medical textbooks?  Not I.

I feel some time must be spent discussing the sex scenes. Warning a vent and potential spoiler coming up.  I feel like a significant amount of effort went in to trying to make sure that the sex scenes were original.  For this I give Foster kudo's as it did differ from others I have read thus far.  Where I do have issue is in the believability factor.  Why oh why did Annabelle have to be a virgin before meeting Charles?  I feel like this has been played out a thousand times.  Not only was she a virgin, when she did hop between the sheets she fell in to it like a pro who has been doing it for years without any of the awkwardness that should accompany your first time (and perhaps more).  I just don't see the appeal of the whole losing virginity thing only to be so acrobatic that you need to run .out and join a circus.  Just my honest opinion.  For once I would like to see the woman be less innocent and therefore a more equal player in the kinky games.

For those interested there will be a second story in this series.  Dude..I think I may have to skip it.  I need a little more originality in the storyline.  This however is only my opinion and peaking at the reviews thus far, it appears to be well liked.