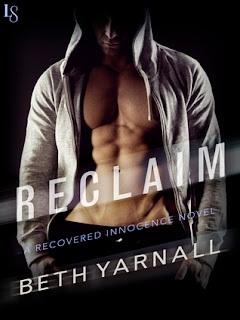 Nolan: Nothing’s ever come easy for me, especially not my dream job at Nash Security and Investigations. Righting wrongs is what I’m meant to do . . . except I manage to blow the very first chance I get. So why don’t they fire me on the spot? Hell, I’d fire myself if I could. Instead, my boss hands me an assignment that’s too important to screw up—and partners me with Lila Garcia, a gorgeous attorney with curves so distracting they should be illegal.

Lila: Like my client, a grieving mother charged with the murder of her own son, I know how quickly the American dream can become a nightmare. If anybody can help me clear her name, it’s Nash Security and Investigations. But Nolan Perry is a wild card. Bending the truth, breaking the law—that’s his business. I need to focus on the evidence. Not on how Nolan’s body fits so perfectly against mine. With a case this personal—and this dangerous—losing control is simply not an option . . . no matter how badly I want to give in.

** I received an advanced readers copy form Loveswept via NetGalley in exchange for an hones review. Thank you!**

Reclaim is the third instalment in the Recovered Innocence series but can be read as a stand alone. All of the instalments can be read as stand alone but this one even more than the first two. Even though there are recurring characters this one focuses more on one that only had a tiny role in the last book.

As is the theme with this series, the book focused on Nash Security and Investigation and freeing an innocent person from prison. Nolan and Lila were paired together in an effort to free a mother who was accused and convicted of killing her son. Nolan was the investigator from Nash Security and Lila was the lawyer working with the Freedom Project.

There were basically two stories happening in this book. There was an investigation and there was a romance. I was drawn to the investigation right away. A mother convicted of killing her son even though it was ruled an accident...how is that even possible? I wanted to know more and the deeper they would dig the more my curiosity took over.

The romance or should I say lust between Nolan and Lila started almost immediately. In fact, they shared their first steamy kiss in the parking lot of the prison when going to meet their client for the very first time. After that it didn't take long to fog up the pages a lot. Now I'm no prude and I enjoy reading a little between the sheets action just as much as the next guy but I struggled with it in this book. I just didn't feel the chemistry enough between the two of them to find it all that sexy. Perhaps it was because it started out too quickly... I don't know. A little more build up and anticipation would have definitely added to the chemistry. It felt a little too much like what I like to describe as the wash, rinse, repeat cycle. Instead of heating up after their first sexual encounter it kind of fizzled for me. Also, the sex distracted from the investigation which I was feeling way more than the romance.

This book was a quick and easy read and the anticipation that I was craving was really not realistic for a book of this length that also had a mystery to solve. Although I wanted more, I appreciated the entertainment value and liked the fact that I could finish it quickly with my busy schedule. 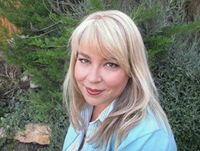 Best selling author, Beth Yarnall writes romantic suspense, mysteries and the occasional hilarious tweet. For a number of years, Beth made her living as a hairstylist and makeup artist and co-owned a salon. Somehow hairstylists and salons always seem to find their way into her stories. Beth lives in Southern California with her husband, two sons, and their dog where she is hard at work on her next novel.

Connect with Beth
Website/Twitter/Facebook/Goodreads
Posted by twinspin at 03:30