Review: My Name is Resolute by Nancy E. Turner 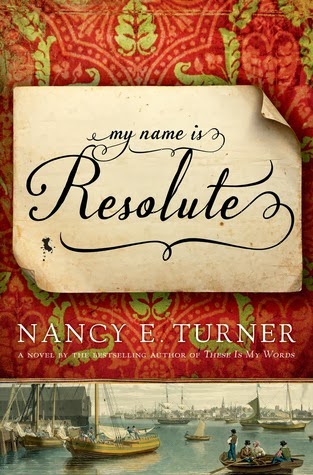 Nancy Turner burst onto the literary scene with her hugely popular novels These Is My Words, Sarah’s Quilt, and The Star Garden. Now, Turner has written the novel she was born to write, this exciting and heartfelt story of a woman struggling to find herself during the tumultuous years preceding the American Revolution.

The year is 1729, and Resolute Talbot and her siblings are captured by pirates, taken from their family in Jamaica, and brought to the New World. Resolute and her sister are sold into slavery in New England and taught the trade of spinning and weaving. When Resolute finds herself alone in Lexington, Massachusetts, she struggles to find her way in a society that is quick to judge a young woman without a family. As the seeds of rebellion against England grow, Resolute is torn between following the rules and breaking free. Resolute’s talent at the loom places her at the center of an incredible web of secrecy that helped drive the American Revolution. Heart-wrenching, brilliantly written, and packed to the brim with adventure, My Name is Resolute is destined to be an instant classic.


Hardcover, 608 pages
Expected publication: February 18th 2014 by Thomas Dunne Books
Terri's Thoughts:
I won this ARC as part of a Goodreads giveaway in exchange for an honest review.  The expected release date is February 18th.
I will start by sharing a little bit of how I have been introduced to Turners works.  For many months her other novel These is My Words kept appearing in my recommended list on Goodreads based on other novels I had read and rated.  I finally purchased the book and I had enjoyed it immensely.  When I saw that she had another novel that was being released and that there was a chance to win it I jumped at the chance.  I was beside myself when I found out that I had indeed won an ARC of the book.
I will not be discussing the plot of this story in my review.  I am not an eloquent enough writer to be able to put in to words just how complex and moving this story was or how it affected me so I will not even try.  This story was truly a masterpiece in my eyes which is tough to achieve in my books.  To witness the story of Resolute from a naïve and privileged  eleven year old to a grown woman with the strength of character to be rivaled by none was captivating.  I fell in love with her and I was truly invested in her journey which I might add was not an easy one.
It is clear by the content in this book that Turner has a passion for this era and that a lot of research went in to the writing of this story.  It is also clear that she has a vivid imagination as I do not think I could come close to dreaming up all of the things that Resolute went through on these pages.  If someone advised me that I would love a book that had pirates, religious fanatics, Indians and the American revolution all wrapped up in one I would have thought them crazy.  Turner managed this and it worked
This is my must read for 2014 so far.  Fans of historical fiction will love this story and I would not be surprised if this book makes the best novel list for this genre for 2014.  I had discovered Nancy E Turner by accident and after reading this story I will be purchasing all of her future work.  She has easily made it to my list of favorite authors.  I thank her for letting me get lost in her work, this book will be staying with me for a long while.

Nancy Elaine Turner was born in Dallas, Texas and grew up in Southern California and Arizona. She began writing fiction as an assignment for a class at Pima Community College and completed a Bachelor's degree in Fine Arts Studies from the University of Arizona in 1999 with a triple major in Creative Writing, Music, and Studio Art. She lives in Tucson with her husband and Snickers, a dog rescued by F.A.I.R. She has two married children and four grandchildren. She also enjoys the outdoors, theater, movies, and antiques