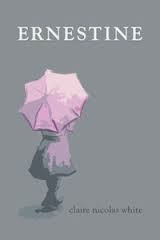 Ernestine, a novella by Claire Nicolas White, is the remarkable story of a widely popular, fictionalized teenaged character in modern Europe whose adventures are based upon the life and times of a ninety year old artist who grew up in Europe during WWII.

The real Ernestine, whose name is Francine, has lived a fascinating life. In her youth she was lovely and interesting, and greatly pursued by men the world over. The child of a Flemish woman and an unknown father (a wounded German soldier or Russian aristocrat); Francine grows up in Belgium with her Grandmother. Later in her 20s, she shelters and protects a Jewish law student from Nazi soldiers while living in Paris, and through the help her employer, secures his passage to safety out of France, but never sees him again.

After the war, she travels to the United States and meets countless celebrities during the post-war American “fanny years”. She describes meeting with Peggy Gugenheim, Max Ernst, and others, including practicing eye exercises with Aldous Huxley after driving across country from New York to California with her first husband.

These fantastic stories are adapted by her protégé Christophe, a young man who routinely visits her and fictionalizes her stories of fame and glory through the eyes of a fourteen year old “Ernestine,” who rides a pink bicycle while carrying an oversized umbrella. Wildly popular in the form of serialized illustrated novels, Francine’s seaside home in a remote part of France is turned into a tourists Mecca for Ernestine followers, complete with bus loads of Eastern Europeans wanting to catch a glimpse of the phantom celebrity.

This setting creates a carnival-type atmosphere where Francine reflects on her past adventures while being doted on by her male housekeeper, a theology professor from a neighboring town. There are secrets, however, and complex relationships that bring long-lost friends and lovers back onto center stage, as mysteries unfold regarding the true nature of the relationships of those who surround her.

A visit form her wealthy husband who lives elsewhere in Europe triggers a series of events that are unanticipated by the reader, setting the stage for a surprise ending.

While the subject could lend itself well to potential serialisation, as a novella it satisfies the reader with its depth of character development and intriguing subject matter.


Published July 2013 by NY Creative Publishing
Terri's Review
The description given for this novella is quite detailed and summarises the book well.  It leaves me only to talk about my opinion of how I felt reading it.
I liked the fact that the characters were all quirky in particular Francine.  It tells the tale of heartache stemming from the war and how strength of character leads her down the path of her life.  The way the characters lives were all intertwined was very interesting to see unfold.  Also the symbolism of the fictional character of Ernestine symbolizes that things are not always as they appear.
I felt that this novella could have been easily extended in to a full length novel and the storyline extended in to greater details regarding Francine's adventures. More detail could have been provided regarding all of the main characters and still would have been an interesting and captivating read.  The conclusion of the story depicts how small our world really is however due to the short length of the story I felt it to be rushed and could have been stretched out for a more satisfying conclusion.  I wouldn't however change the outcome, just extended it.
Overall an enjoyable read by an author that I was previously unfamiliar with.  I will look in to her other works to see what they will offer me.  I deduct a star from my rating only because this novella only touched the surface on its potential.


Claire Nicolas White is a poet, translator, playwright, and the author of a novel, a memoir and three non-fiction books about members of her family. Her poetry has appeared in many publications including the New Yorker, the Partisan Review, the Paris Review, the Hudson Review, Grand Street, Atlantic Monthly and Commonweal.
Claire was born in 1925 in Groet, in the north of Holland. Her father, Joep Nicolas, was a Dutch stained glass painter; her mother, Suzanne Nys, a Belgian sculptress. She went to convent schools in Limburg, then for a year to the École Alsacienne in Paris. With the German invasion imminent her family came to the United States, arriving in Manhattan in 1940. There she attended the Lycée Français, from which she graduated in 1943. She finished her studies as an English major at Smith college. She had a short story and a poem published in Junior Harper’s Bazaar and published a bilingual journal, called Marsyas, which was featured in the magazine. She also translated a memoir by a young French girl, written during the war, for Pantheon Books.

During the summer of 1946 she drove with her mother, sister and boyfriend Robert White, sculptor and grandson of the architect Stanford White, to California on Route 66. In the Mojave Desert and in Los Angeles they stayed with her uncle Aldous Huxley, whose wife Maria was her mother’s sister. She and Robert were married in 1947, and together they moved into the farmhouse on the White estate on the North Shore of Long Island. They led a simple, rural life there and had two children. When Robert was awarded the Prix de Rome in 1952 the family relocated to Italy, where their third child was born and where they stayed for three years.
Claire continued to write poems and articles for Vogue and Harper’s, and published a novel, The Death of the Orange Trees (Harper and Rowe, 1963), and Biography and Other Poems (Doubleday, 1981). On Long Island Claire taught dancing and French, and wrote several plays for the Women’s Theatre Repertory. Later she taught poetry and memoir workshops to senior citizens for TAPROOT as well as at the Walt Whitman House, C.W. Post, Long Island University and Stony Brook University.
Over the years she continued to spend time in Holland, composing a book about her father’s work (Joep Nicolas: His Life and Work; Van Spijk, 1979). She also translated three novels from the Dutch and edited a Dutch issue of Columbia University’s Translation magazine, as well as translating French poetry such as Alfred de Musset’s La Nuit de Mai.
Her collection Biography and Other Poems was published by Doubleday in 1981, her memoir, Fragments of Stained Glass by Mercury House in 1989, and The Elephant and the Rose: a Family History in 2003 by Vineyard Press. She edited Stanford White: Letters to his Family for Rizzoli in 1997, and published a book about her late husband’s work (Robert White, Sculptor; Waterline) in 2006. She has been the editor of Oberon magazine for ten years.

Posted by twinspin at 07:19 No comments: