Review: A Hero to Love (Changing Tides #2) by Gail Chianese 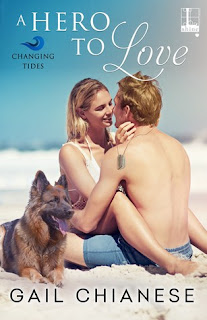 A military police officer on the verge of a new beginning. A beautiful woman devoted to her career and her dream of putting down roots. The hardest thing they’ll ever do is to take a chance on love . . .

Navy Chief Master at Arms Jackson “Jax” Faraday is at a crossroads. He has to decide whether to reenlist or get out while he’s young enough to make a difference in the civilian world. Either choice could mean leaving behind his girl: his K-9 partner, Bella. But when she’s injured during a training session, Jax’s only concern is making sure she’s okay.

As the Navy base veterinarian, town local Risa Reynolds is right where she belongs: close to her parents in a farmhouse full of animals—with room to grow. She’s seen enough to put military men are on her “not happening” list, because they always leave.

But when a tall, hazel-eyed sailor arrives in her clinic with his dog in his arms, Risa finds herself falling hard. And all kinds of rules will get broken when Jax, a man who sticks to the straight and narrow, learns that there’s no predicting the twists and turns of the heart . .

I received an advanced copy of this book from the publisher via Netgalley in exchange for an honest review.  Thank you!  The expected publication date is August 22nd, 2017.

This is the second in the Changing Tides series however don't worry if you have not read the first in the series.  I did not read the first and I couldn't even tell you who the first book could have been about so there is no impact whatsoever reading this story as a stand alone.  Although I am curious about it and may go back and check it out.

I feel the need to talk about Jax for a moment.  Who could not help but fall in love with him?  His number one focus was on his canine companion and he was hot to boot!  Every girls dream, or at least this girls dream as I am a sucker for anything to do with dogs.  Considering Bella was his best friend, I was in love with him from the first word.  Pair him with Risa who is an animal loving veterinarian and you have a perfect match.

While there was an aspect tot he story about someone with an axe to grind with Risa that seemed a little bit random, the story of Risa and Jax was solid.  Perhaps not an overly original story however an entertaining one nonetheless. 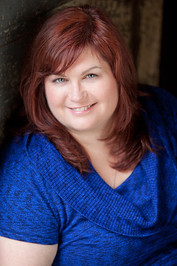 Gail currently lives in beautiful Connecticut, but originally hails from sunny California. She is the mom of three amazing kids, the wife of a 27 year Naval officer and the rescuer of three furbabies. In her spare time, she likes to ghost hunt with her hubby, geocache with her family and lock herself away with a great book.