Review: At Night We Walk In Circles by Daniel Alarcón 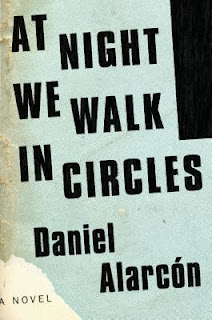 Nelson’s life is not turning out the way he hoped. His girlfriend is sleeping with another man, his brother has left their South American country, leaving Nelson to care for their widowed mother, and his acting career can’t seem to get off the ground. That is, until he lands a starring role in a touring revival of The Idiot President, a legendary play by Nelson’s hero, Henry Nunez, leader of the storied guerrilla theater troupe Diciembre. And that’s when the real trouble begins.

The tour takes Nelson out of the shelter of the city and across a landscape he’s never seen, which still bears the scars of the civil war. With each performance, Nelson grows closer to his fellow actors, becoming hopelessly entangled in their complicated lives, until, during one memorable performance, a long-buried betrayal surfaces to force the troupe into chaos.

Nelson’s fate is slowly revealed through the investigation of the narrator, a young man obsessed with Nelson’s story—and perhaps closer to it than he lets on. In sharp, vivid, and beautiful prose, Alarcón delivers a compulsively readable narrative and a provocative meditation on fate, identity, and the large consequences that can result from even our smallest choices.

Hardcover, 384 pages
Expected publication: October 31st 2013 by Riverhead Hardcover
Genre: Literary Fiction
Kristine's review:
*I won a copy of this book in a Goodreads giveaway in exchange for an honest review*
I will admit that I wasn't entirely sure about this book when I first started reading. It was a little confusing and I wasn't sure where it was heading. Who was the mysterious narrator and why was he so obsessed with Nelson's story? It was clear that something terrible happened to Nelson but what?
As I continued to read I began to understand a little more and as I did I began to think that Alarcon was brilliant. Through the interviews that the narrator had with key characters the reader was able to fully understand Nelson, Henry and Patalarga. We found out about the history of these characters and the events in their lives that defined them leading up to what happened to Nelson. Throughout the story you do not know what happened to him you just know that something did. You also don't know who the narrator was or how he was connected to the story. For me this kept the pages turning in an effort to find out. The story jumped back and forth between characters describing events both past and present in their lives so that by the time the book was finished they were so well developed that you felt like you knew them. Each event and story throughout the book was interesting and it was amazing (in my opinion) how it helped to tie the story together in the end.
If I had to describe this book I would say that it was unique, compelling and thought provoking. Daniel Alarcón is a new to me author but it is very clear that he is truly talented and has a very bright future ahead. There is no doubt that I will be checking out some of his other work. 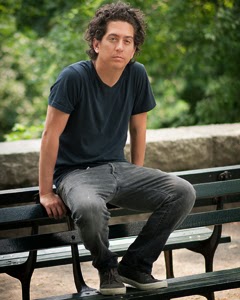 Daniel Alarcón is author of the story collection War by Candlelight, a finalist for the 2006 PEN/Hemingway Foundation Award, and Lost City Radio, named a Best Book of the Year by The Washington Post and the San Francisco Chronicle. His writing has appeared in Granta, n+1, and Harper's, and he has been named one of The New Yorker's "20 Under 40." He lives in San Francisco.