Review: All the Stars in the Heavens by Adriana Trigiani 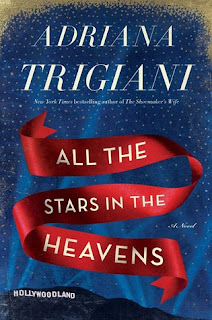 Adriana Trigiani, the New York Times bestselling author of the blockbuster epic The Shoemaker’s Wife, returns with her biggest and boldest novel yet—a hypnotic tale, based on a true story—that dazzles with the signature elements of her previous work—family ties, artistry, romance, adventure—and introduces an unforgettable new heroine: Loretta Young, an ambitious starlet struggling to survive in Hollywood’s dream factory

In this spectacular saga as radiant, thrilling, and beguiling as Hollywood itself, Adriana Trigiani takes us back to Tinsel Town’s golden age—an era as brutal as it was resplendent—and into the complex and glamorous world of a young actress hungry for fame and success. With meticulous, beautiful detail, Trigiani paints a rich, historical landscape of 1930s Los Angeles, where European and American artisans flocked to pursue the ultimate dream: to tell stories on the silver screen.

The movie business is booming in 1935 when twenty-one-year-old Loretta Young meets thirty-four-year-old Clark Gable on the set of The Call of the Wild. Though he’s already married, Gable falls for the stunning and vivacious young actress instantly.

Far from the glittering lights of Hollywood, Sister Alda Ducci has been forced to leave her convent and begin a new journey that leads her to Loretta. Becoming Miss Young’s assistant, the innocent and pious young Alda must navigate the wild terrain of Hollywood with fierce determination and a moral code that derives from her Italian roots. Over the course of decades, she and Loretta encounter scandal and adventure, choose love and passion, and forge an enduring bond of love and loyalty that will be put to the test when they eventually face the greatest obstacle of their lives.

Anchored by Trigiani’s masterful storytelling that takes you on a worldwide ride of adventure from Hollywood to the shores of southern Italy, this mesmerizing epic is, at its heart, a luminous tale of the most cherished ties that bind. Brimming with larger-than-life characters both real and fictional—including stars Spencer Tracy, Myrna Loy, David Niven, Hattie McDaniel and more—it is it is the unforgettable story of one of cinema’s greatest love affairs during the golden age of American movie making.

I received an advanced copy of this book from the publisher via Edelweiss in exchange for an honest review.  The expected publication date is October 13th, 2015.

I have to admit that this story took me a long time to read.  This is because I kept stopping to google the characters in the story.  I have to be honest, the only one I had ever heard of was Clark Gable and that was only from one movie that to this day I don't believe I have ever seen from beginning to end in one sitting.  One downfall of google is that I also knew how the story was going to play out.

This story was fascinating in how it depicted the era that was 1930's Hollywood.  From all the leading men and woman, the glamorous lifestyles, and the double standards and hypocrisy that was the movies and its players.  The stars of this era seem to stand alone as legends compared to the stars of today, perhaps because they are so much more accessible today than back then.

I really liked Loretta's spunk and how she cared for those in her life.  I did not like how she fell for her leading men as none of them seemed right for her.  In fact based on this story none of her choices were good.  Although they did have some chemistry, I also didn't really feel Loretta and Clark together.  I don't know why, perhaps his womanizing ways, the fact that he was married, or the fact that he just reads slime ball to me.  As a side note, did the woman back in the day really swoon for him?  I have seen a ton of photo's and he simply does not look like the attractive guy described and also looks like he could use a good shower in all of them.  I am glad I have grown up on much better eye candy in show business!

That aside, this story was rather tragic.  Although there is obviously artistic liberty taken with the storyline, it does outline the storyline of Loretta Young.  The details of the story may have been different in real life but the outcome is the same.  I enjoyed my time researching all of these characters just as much as reading the story.

One last thought.  To address the elephant in the room as I have seen some mention in some other reviews.  Some information has come to light that the romance between these two was perhaps not what it was depicted and that it was something a lot more dark with unpleasant consequences.  This has dampened somes opinion of this story.  As there is nobody alive to validate the facts I recommend to treat this story as it is meant to be...a work of fiction.  This story could be just as entertaining if the characters had made up names.

I enjoyed this one! 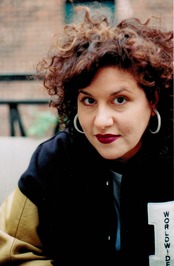 Adriana Trigiani is beloved by millions of readers around the world for fifteen bestsellers, including the blockbuster epic The Shoemaker's Wife; the Big Stone Gap series; Lucia, Lucia; the Valentine series; the Viola series for young adults; and the bestselling memoir Don't Sing at the Table. Trigiani reaches new heights with All the Stars in the Heavens, an epic tale from the golden age of Hollywood. She is the award-winning filmmaker of the documentary Queens of the Big Time. Trigiani wrote and directed the major motion picture Big Stone Gap, based on her debut novel and filmed entirely on location in her Virginia hometown, and released nationwide in the fall of 2015. She lives in Greenwich Village with her family.