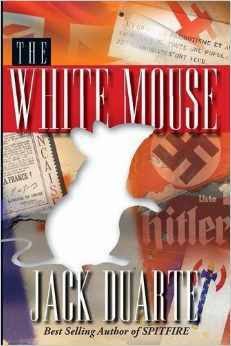 The White Mouse is historical fiction and based on the real life exploits of Australian Nancy Wake during World War II. Wake was responsible for setting up a successful escape network around Marseille, France at the beginning of the war. She fled France and began working for Great Britain's Special Operations Executive during the invasion of Normandy. Wake succeeded in making the Auvergne Maquis a remarkable fighting force and did great harm to German Wehrmacht forces attempting to aid their coastal defences. For her remarkable efforts, Wake became the most decorated female officer in the British military during the war. She died in London in 2011 at the age of 98.

I received a copy of this book through a Goodreads giveaway in exchange for an honest review. Thank You!

I love stories relating to both Wold Wars, especially ones based on true stories. When I entered the giveaway for this book I was both excited and hopeful that I would get a copy and I was thrilled to be one of the lucky people to receive one.

This was an interesting read for me. I didn't really know much about Nancy Wake and I found her story intriguing. As I mentioned above, I love reading about the war so this was no surprise to me. Unfortunately the book read more like a documentary so it may not appeal to everyone. Although the text was interesting it did seem to lack some life behind the characters which made for a somewhat dull read and took away from the actual events that occur throughout. It reminded me of reading an essay. All the facts and information are there but no feeling or emotion. For lack of better words it was a bit robotic. For this I was a little disappointed.

This book would be good for people who are interested in learning about Nancy Wake but don't really care about the story or emotions of a book. For me, I like to have both.

Jack DuArte is a native of New Orleans with a varied career in writing. DuArte attended Jesuit High School and worked for the Times-Picayune as a teenager. After attending the University of Kentucky and later graduating from the University of Evansville, DuArte served as an Air Force officer in Vietnam and received the Bronze Star for his efforts. He returned to New Orleans in 1971 and went into the wine business. He also authored a weekly column called Gastronomy for the Times-Picayune for a number of years and later hosted a radio talk show for WWL.

DuArte later enjoyed a full career in the wine business where he owned several Napa Valley wineries. DuArte always enjoyed a long time love affair for the thoroughbred horse industry and returned to Kentucky in 2001. He is an owner and breeder of thoroughbreds in Central Kentucky.

The White Mouse is DuArte’s fifth novel, and was his eighth published work. The White Mouse is part of DuArte’s World War II Series. Other WWII novels include The Resistance Singapore, Spitfire and MALTA. All are historical novels and predominantly based on fact.

DuArte read from his work at the International Book Project’s Passport to Literacy in Lexington, KY. He also participated in the several Kentucky Book Fairs in Frankfort and numerous other book fairs around the country.

DuArte and his wife Susan reside in Lexington, KY.