Review: The Arsonist by Sue Miller 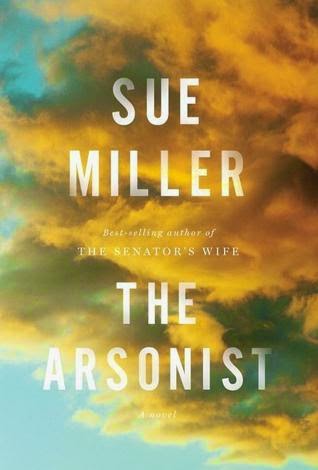 From the best-selling author of While I Was Gone and The Senator's Wife, a superb new novel about a family and a community tested when an arsonist begins setting fire to the homes of the summer people in a small New England town.

Troubled by the feeling that she belongs nowhere after working in East Africa for 15 years, Frankie Rowley has come home-home to the small New Hampshire town of Pomeroy and the farmhouse where her family has always summered. On her first night back, a house up the road burns to the ground. Is it an accident, or arson? Over the weeks that follow, as Frankie comes to recognize her father's slow failing and her mother's desperation, another house burns, and then another, always the homes of summer people. These frightening events, and the deep social fault lines that open in the town as a result, are observed and reported on by Bud Jacobs, a former political journalist, who has bought the local paper and moved to Pomeroy in an attempt to find a kind of home himself. As this compelling book unfolds, as Bud and Frankie begin an unexpected, passionate affair, arson upends a trusting small community where people have never before bothered to lock their doors; and Frankie and Bud bring wholly different perspectives to the questions of who truly owns the land, who belongs in the town, and how, or even whether, newcomers can make a real home there.

I received an advanced copy of this book from the publisher Knopf via Edelweiss in exchange for an honest review.  The expected publication date is June 24 2014.

I will admit that I was slightly confused at first with this book.  It is not yet released however it takes place during the Clinton/Lewinsky scandal which as we all know what quite some time ago.  I thought maybe this was a re-release however I can not find any evidence to support that.  Perhaps it was a work that Miller did previously and is just now publishing.

While the synopsis given for this story is pretty accurate I feel it is not really what the book is about.  Yes there were a series of arsons in the small town and yes Frankie and Bud start a passionate relationship but it is not really the true story behind the story.  Both of these events are occurring at the same time however the true story is about self discovery and learning about yourself.

The story of Frankie's ailing father was actually detailed and more impactful than the story of the arsons.  Her relationship with her parents, their home and finding where she belongs is really what this story was about.  If someone was looking for a suspenseful read about a serial arsonist than they may be left less than satisfied with this read.  If someone is looking for an epic love story...ditto.

Ultimately while I enjoyed this read I found that not a lot happened throughout the story which made it feel a lot longer than it was.  I understand that this story was more about Frankie returning home and trying to learn what the feeling of home and belonging really is and therefore I was able to still enjoy the story.  It was just a bit on the slow side.

As a last point those who like stories to be wrapped up neatly by the end should not read this. Without divulging what occurs. I found that all of the plots within this story were left open ended.  While I feel that a strategic open ending can be genius I thought there was just too much in this one.  All of the storylines felt unresolved at the end to me and just left me with a question mark.

Sue Miller (born November 29, 1943 in Chicago) is an American writer who has authored a number of best-selling novels. Her duties as a single mother left her with little time to write for many years, and as a result she did not publish her first novel until 1986, after spending almost a decade in various fellowships and teaching positions. Since then, two of her novels have been made into feature films, and her book While I Was Gone was an Oprah's Book Club pick in 2000.