Review: Fake It by Jennifer Chance 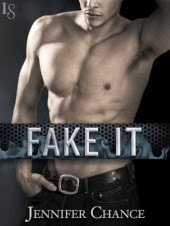 As her sizzling new series continues, Jennifer Chance sparks some serious combustion between a sexy biker and a corporate go-getter who’s ready to let her hair down.

New grad Anna Richardson works hard—so hard that she’s given up having a romantic life. Anna has even convinced her friends that she’s dating an amazing guy—who they’ve simply never met. But now Anna has a wedding to attend and needs to produce the hottie she’s been lying about for the past six months. Enter Jake Flynn, her infuriating, motorcycle-riding, jaw-droppingly gorgeous neighbor, who’s more than willing to fake it for a weekend. In fact, Jake won’t be satisfied until things get real.

Though Jake is only playing the role of adoring boyfriend, he’s starting to feel the heat, and judging by Anna’s sweet blush, so is she. Letting chemistry this intense go to waste would be a real shame. Soon, though, the thin line between fantasy and reality fades. Jake may not be what every buttoned-up fast-tracker wants, but he’s sure as hell what Anna needs. And if she takes a ride with him, their adventure never has to end.

I received an advanced readers copy of this book from Random House Publishing Group - Loveswept via NetGalley in exchange for an honest review. Thank You!

Fake It is the second book in the Rule Breakers series but can be read as a stand alone. Each book covers the story of different characters and you do not need to read the first book to follow along.

I thought that this was a cute story about a make believe relationship where chemistry blurs the lines between reality and fantasy. Anna needs a fake boyfriend to be her date for a friends wedding and Jake, the hunky neighbour that she has been eyeing, happens to be more than willing to fill the role for her. When the weekend away turns out to be more than either of them ever dreamt of things get complicated and feelings get dangerous.

There is a ton of chemistry between Jake and Anna and it doesn't take long for the pages to heat up. The "fake" relationship is every girls fantasy come true and what dreams are made of. Jake shows that he isn't just a motorcycle riding bad boy but a man that knows how to please a woman in more ways than one. Unfortunately both characters have issues from their past and completely opposite lives in the present which complicate things and prove that chemistry isn't always enough.

Considering that the book isn't very long I found that there was a sufficient development between the characters and that I liked both of them. Anna could get a bit annoying at times but I do believe that was the authors intent in order for the plot to flow as it did. It was not a unique story but entertaining none the less and I really enjoyed it. I will be sure to check out the first book in the series and will follow any that come after.

Jennifer Chance is the award-winning author of the new adult Rule Breakers series. A lover of books, romance, and happily-ever-afters, she lives and writes in Ohio.