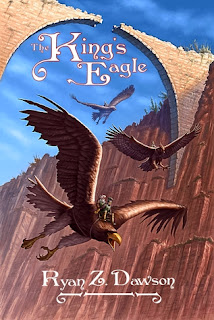 After freeing a giant eagle from a snare, Okchaw Chief Silverlock witnesses the destruction of his village and the mass murder of his people. He is spirited away from the scene of the massacre by the Imnura, legendary eagle riders wielding advanced weaponry. In their cliff city of Emnor, he attempts to deal with his physical wounds as well as his deep survivor's guilt and consuming hunger for violent revenge. But when an old enemy of Emnor returns to the cliff city with a new and terrible power, Silverlock finds himself thrust once more into open war.

I received this book as part of a Goodreads giveaway and I had a really difficult time with it.  I will start by saying that it is not one of the usual genres that I gravitate towards and that may be the main factor.  As I have nothing in this genre in my library I have nothing to compare it to and for that reason I hesitate to be too critical.  Perhaps my mind is not as open as I thought it was?  This is a short read of 130 pages and it took me four days to read it.  That never happens.

The story is centered around the activities that occur after Silverlock rescues an eagle from a trap.  From this point on there is a lot of bloodshed and very little character development.  I could never really understand what the underlying theme of the story was.  Self discovery?  Revenge? I'm still not sure.

With that in mind I will keep this review short.  I really wanted to like this book and I feel bad that I had received it from the author in hopes that I would enjoy it.  I do not blame the writing or even the storyline.  I am going to blame myself for this one and the fact that I thought I was open to every genre.  This genre was clearly not for me however this book may have been perfectly suited for someone else.  Lesson learned. 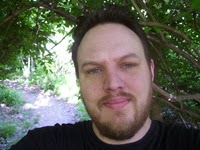 Ryan Dawson is a musician and fantasy author based in Southern Indiana. He created a language called Imnura for his first book, The King's Eagle. His stories are high fantasy stories which skew mostly toward adult audiences. He likes to write about dreams and memories, and his characters are often dealing with loneliness and self-doubt.
Connect with Ryan
Twitter: ArzieDee
Posted by twinspin at 04:00