Review: Made to Last by Melissa Tagg 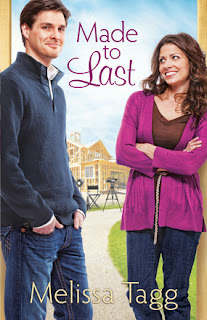 Miranda Woodruff, star of the homebuilding show "From the Ground Up," will do anything to keep the job she loves. Due to a painful broken engagement and a faith she's mostly forgotten, she's let her entire identity become wrapped up in the Miranda everyone sees onscreen. So when she receives news that the network might cancel her program, she must do the very thing she fears most: let the spotlight shine on her closely guarded personal life. The only problem? She's been living a lie--letting viewers believe she's married--and now she's called upon to play wife to a sweet, if a bit goofy, pretend husband to boost ratings.

Desperate to help his family and prove he's not a total failure, reporter Matthew Knox is looking for a breakout story. When he's offered the opportunity to do an online serial feature on Miranda Woodruff, he jumps at the chance, even if celebrity reporting isn't really his thing. But as soon as he meets Miranda, he knows she's keeping secrets.

When Miranda's former fiance suddenly appears on the scene again, she doubts her life could get more complicated. Juggling three guys, an on-the-rocks television show, and the potential exposure of her deception is way more than she bargained for. Can the woman who makes things look so good onscreen admit it's time to tell the truth about who she is? And if she does, will the life Miranda's built come crashing down just as she's finally found a love to last?

This was a super cute book about the choices people make and living with the consequences of those actions. It was well written and easy to read with a large cast of quirky, likeable characters.

Made to Last is basically about Miranda's complicated journey. She is the star of a home building show that landed the role 3 years prior by telling stories about her "husband" and how he influenced her. It was a little white lie at the time as she was engaged and she thought they would soon be married. She had no idea that he would leave, devastating her, and the lies get bigger. Tagg does a magnificent job in the development of Miranda making the reader really feel the turmoil, regret, doubt, sadness and insecurities of her character. Her life is turned upside down when she discovers that her show is in trouble and they want to bring the husband that she talks about so much into the public eye to try to boost ratings. The fact that she doesn't actually have a husband is not a problem for her manager and producer who decide that a fake husband will do the trick. This creates a moral dilemma for Miranda because she knows it is wrong but at the same time her show is all she knows that defines who she is as a person.

Blaze is a man who finds himself in the role of Miranda's husband. His character is humorous and perhaps a little clumsy. He accepts the role easily and falls into character. There are issues in his past that we don't know and I can't help but think that there may be another book in the future that deals with them.

Mathew is suffering from a few bad career moves, a shaky relationship with his father and not enough money to help his brother get the surgery for his niece that she needs. He takes the job of shadowing Miranda to write for a daily blog in an effort to save his career and help his niece. It doesn't take long for him to see that there is more to Miranda than meets the eye.

Robbie is the man that broke Miranda's heart when he broke their engagement and makes an appearance back in her life after she is "fake" married to Blaze.

With the three men there are many situations and emotions that Miranda has to deal with. This book is really about figuring out who she is and what she wants in life and what path she needs to take. There are moments of humour, overwhelming emotion, faith and discovery throughout. The story is not typical and does not lead in the direction that most might think which I really appreciated and enjoyed more because of it.

This is Melissa Tagg's debut novel and I believe that she has a promising future ahead of her. 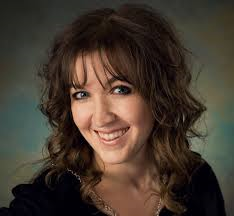 Melissa Tagg is a former reporter turned author who loves all things funny and romancey. Her debut novel, a romantic comedy titled Made to Last, released from Bethany House in September 2013. Her second book, Here to Stay, releases May 2014. In addition to her nonprofit day job, she is also the marketing/events coordinator for My Book Therapy, a craft and coaching community for writers founded by award-winning author Susan May Warren.

During her reporting days, Melissa interviewed presidential candidates and llama farmers, rode a hot air balloon and flew a plane, and once found herself face to face with a buffalo. But today she gets her kicks by letting her characters have their own fun. She's passionate about humour, grace and happy endings.